So, you’ve finished your masterpiece and now you want to get it published? These days, there are a huge amount of avenues for writers to take that can be completely bewildering to the novice. For many people self-publishing is what writers who can’t get published through the more traditional routes do because their work is not quite up to scratch. This is true in some cases but certainly not in others. As with crowd-funding some of the most successful books of recent years have been published this way. 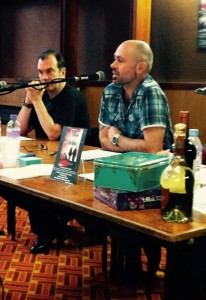 I was lucky enough to have my debut novel accepted by Unbound. They are unusual in that they are a professional publishing house who also have a crowd-funding platform. On the surface, this appears to be a cutting edge development in the book world, but in actual fact its origins lie back in the 1800s when Charles Dickens and his like did pretty much the same thing. He wrote his books by pitching them to prospective readers and then their funding enabled his books to be published. In an internet age this idea has now been resurrected – and to great effect. Not only does it mean that the readers have a say in what they want to see published, but it enables the writers to have a ready-made audience for their work.

It has other uses too. In an increasingly conservative age where publishers produce less fiction per year and are looking for safe bets such as the next celebrity biography or the all too familiar title that begins with Fifty Shades Of… or The Girl Who… alternative methods are required. By using this particular method Unbound also deftly manage to avoid the pitfalls of arts council funding, which as history has shown, can be very precarious, and has led to the downfall of many independent booksellers. Crowd-funding is increasingly the only option for some writers.

I have to admit, even I was sceptical at first, and I actually turned their offer down initially, thinking them to be a self-publishing house or even a vanity publishing company. As far as I’m concerned there’s a place for all these things – but it just wasn’t the place I wanted my novel to end up. But when I did some research I realised that not only had JK Rowling helped fund one of their authors, Nikesh Shukla, who wrote The Good Immigrant, but another of their books, The Wake by Paul Kingsnorth, was longlisted for a Man Booker prize. This gave the entire venture the credibility that I craved, and once accepted, I felt I was in safe hands. And I still do.

It wasn’t easy raising the money to fund my book. I had three months in which to raise over three and a half thousand pounds. I am not wealthy and neither are my family or friends, but through sheer hard work and determination, and yes, a lot of courage and commitment, I achieved my goal two days ahead of the deadline!

And so my debut novel, A Murder Of Crows, will be published later this year. I have been supported throughout the process by not only those closest to me, but from people I previously did not know, from as far afield as the States and Australia. I have been touched time and again by people’s kindness and their generosity in helping me on my journey.

And now other writers are coming to me for advice on how I did it – which is an amazing position to find myself in. There were many times when I never thought I’d get to this stage but it goes to show that writers are never really alone, though it can sometimes feel like that.

My story is only a beginning, and a humble one at that, but no less humble than a pencil being dragged hesitantly across paper. And anyway, all big things come from small beginnings. So take courage and commitment and make your own dream come true – and write.

To find out more about A Murder Of Crows and become a patron please click on the following link: https://unbound.co.uk/books/a-murder-of-crows