In the wake of becoming a published author, people are asking me for advice on how to become a published author. It’s at this point I have to ‘fess up and reveal that I am actually a phoney, and the only advice I can give is “ride on the coattails of an already-published author”. 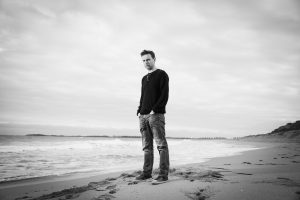 Because that’s what I did. I cheated. I feel bad explaining that to people who have toiled away for decades, filling their sock drawers with unpublished manuscripts and rejection slips until their socks are left languishing on the floor beside the bed with nowhere to call home. I dodged all that. “What a charlatan!” they proclaim (probably). Everyone has been very nice to my face about it, but I swear they sit at home seething about it. “Impostor!” they mutter behind the sanctity of their front doors. Probably.

My co-author didn’t cheat. Tony Black spent years filling his sock drawer with future novels and polite “no thank-you” notes. Then one day, I messaged him and said “hey, let’s write that book we talked about writing” and boom, less than a year and a half later I’m a published author. I’m such a phoney.

I probably shouldn’t tell people all that. To be totally honest, I spent nearly 10 years not finishing a novel that sits abandoned in a metaphorical sock drawer. And over the past 20 years I have written a stupid amount of words in all manner of writing styles (more on that later). But my stroke of luck in becoming a published author does confirm my theory that a lot of it’s about luck. If you’re a good writer, you just need to be in the right place at the right time. It’s the same as being in a band – you just need the right person to hear your hit-in-waiting to make it an actual hit.

Unfortunately none of this helps anyone. So here are some actual helpful (hopefully) things I learnt while writing Bay Of Martyrs (available now in all good digital and analog bookstores). 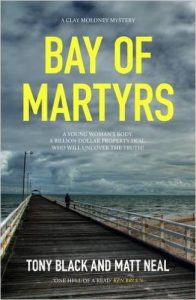 You know that person who’s always banging away about the great book they’re writing? Don’t be that person. Having spent nearly 10 years telling people about the great novel I never finished writing, I decided with the first draft of Bay Of Martyrs to not tell anyone I was writing it. The only other person in Australia that I told I was writing it was my wife (I have no idea who Tony told). I figured that once I got the first draft done, then I would tell people, as if that was some kind of reward. It worked. I did less talking and more writing. And every time I didn’t feel like writing, I could hear a voice in the back of my head say “well, I guess no one will ever know about it then….”.

Instead of telling people I cheated and merely rode on the coattails of an established author, I should tell people I found a great mentor who helped me on the road to becoming published. Because I did. I owe so much to Tony Black. First he tested me – he made me write out lengthy character biographies and a couple of practice chapters to see if I was made of the right (write?) stuff. Then he taught me – he sent me a list of dos and don’ts that proved invaluable. It featured stuff like be sparing with adverbs, keep your point of view consistent in a chapter, use all five senses in setting up scenes etc. All really helpful stuff. Then he showed me how to do it – Tony followed in my first draft footsteps, improving what I had written as I ploughed on ahead. I would go back and see what he had changed (we used Google Docs in case you’re wondering, it’s brilliant for real-time editing), and I would then try to write each new chapter so he would have to change less and less. He said I almost had the hang of it by chapter 21.

If you want to be a writer, I think you should be able to write anything, anywhere, any time. It’s something I’ve done for 15 years as a journalist – you never know what assignment you’ll get on any given day – but it was something I prided myself on before I got a real job. It means that I now get asked to work on cool things, as well as being able to funnel any idea I have into its appropriate medium. Whether it’s songs, reviews, film scripts, TV sitcom pilots, poetry, feature articles, colour articles, listicles, radio plays, ad copy, fantasy stories, letters, blogs, blurbs, band bios, and now crime fiction, I’ve had a crack at all of them. And I’ve learnt something from each different style that I’ve been able to transfer to another style. From screenwriting I learnt some golden rules such as “show don’t tell” and “enter late, leave early” that proved helpful in writing a crime novel. From radio plays I learnt how comedy works, which proved helpful in writing listicles and a sitcom pilot (as well as a crime novel).  From poetry I learnt the efficiency of language that proved helpful in journalism (as well as a crime novel).

So there you have it – these are just some of the things I’ve learnt as a writer that hopefully are of some use to you, dear reader.

For more details on Bay of Martyrs go to