Now and again, when I emerge blinking like a mole from my writer’s garret, I bump into someone I haven’t seen for a while. “Are you still writing?’ they ask brightly. That’s like asking me if I’m still breathing. I believe that’s the only reason we should write: because we can’t not write, because we need to write as we need to eat, drink, sleep and dream, because we have stories we need to tell.

There are good reasons to write just for yourself: a diary, a journal, morning pages that help clear the mind for the day ahead. Writing a book you hope to publish requires a leap of faith. You have to believe in yourself and your talent. You have to believe someone will want to read what you have written. For most of us, self-confidence doesn’t come easily.

Feedback and encouragement helps. Oh, how it helps. I took my first tentative steps towards admitting I was a writer back in the late 1980s. Feeling in need of some guidance, I was lucky. I found a class at Kilmardinny House in Bearsden in Glasgow led by the inspirational Two Sheilas: Sheila Lewis and Sheila Aird.

Talented and well-published writers, they spoke about both art and craft. They set tasks. Write a page featuring two people having a quarrel. Write a scene remembering that we have five senses, not only hearing and sight. Write a scene set during a thunderstorm. Terrifyingly, the request was to do some writing at home and bring it in to read out the following week.

I can still remember how nervous I felt as my turn to read approached, dry mouth, pounding heart and all. Daring to dream and stick my head above the parapet, I earned the reward of being told: “You can write.” The joy of that moment has stayed with me ever since.

Pointed in the right direction, I joined a writers’ group and began attending writers’ conferences. At the annual weekend school run by the Scottish Association of Writers, I entered almost all the competitions. Critiques from working writers were invaluable, even if they were sometimes brutally honest.

The late Hugh C Rae, who wrote as Jessica Stirling, was especially rigorous, and demanded you be rigorous too. Like many Scottish writers, I learned so much from Hugh, who was always willing to share his wide knowledge of writing and publishing.

Dundee publishers DC Thomson were very encouraging to beginning writers, as they still are. My first published story, boy meets girl, appeared in My Weekly magazine. I was working then as a Scottish Tourist Guide and our tour had brought us to Dumfries. I propped the magazine open on the dressing table of the hotel room so I could see my story and its lovely illustration as I dropped off to sleep that night and as soon as I opened my eyes the next morning.

I was a published writer and I was so proud of myself, excited that people were reading my story and paying good money for it, too. When I published a different story in her favourite People’s Friend magazine, my elderly aunt was fair bursting with pride. As far as she was concerned, I had made it.

I put that first My Weekly story into a clip frame. It’s still there, on the wall by my computer. Even twenty years on, I get a wee thrill every time I look at it.

My first full-length work was the non-fiction Damn’ Rebel Bitches: The Women of the ’45. When I was handed a copy, hot off the presses, at the publisher’s offices in Edinburgh, I was faintly surprised to realize that I had written a book. Up to then I had just been typing pages. First published 19 years ago, DRB has never been out of print since. Going into a bookshop and seeing it and my other books on the shelves gives me a feeling of immense satisfaction. I’ve done what I was put on this earth to do.

I took away an important maxim from the class run by the Two Sheilas. “Writers must write.” You have to get it out of your head and onto the page. Then you need to put it away and go back to it later. We all have to learn how to edit our own work. I firmly believe we all need an editor too. The best editors draw the best out of you, pointing out what you still can’t see because you’re too close to it, not able to see the wood for the trees.

At the Linlithgow Book Festival a few years ago, a young woman told me that in showcasing just how many women had played their part in the Jacobite Rising of 1745, Damn’ Rebel Bitches had changed her life. I cherish that moment, and others like it.

What a privilege it is that readers allow writers inside their heads, hearts and imaginations. We owe them the best possible book that we can write. 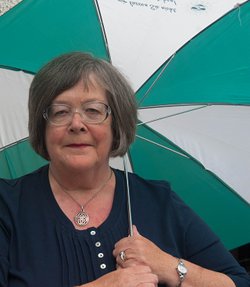 Maggie Craig writes historical novels and historical non-fiction. She is the author of the ground-breaking and acclaimed Damn’ Rebel Bitches: The Women of the ’45, Bare-arsed Banditti: The Men of the ’45 and When the Clyde Ran Red. She has just published a biography, Henrietta Tayler: Scottish Jacobite Historian and First World War Nurse. Her next historical novel is Dance to the Storm, which will be published in November 2016.

Maggie is a Glaswegian who now lives in North East Scotland with her husband and a one-eared cat, aka Last Cat Standing.