Mason Cross was born in Glasgow in 1979. He studied English at the University of Stirling and has worked variously as a tax officer, events coordinator, project manager and pizza delivery boy. He lives in Glasgow with his wife and three children.

THE KILLING SEASON, his first novel is an action thriller starting Carter Blake, a mystery man who specialises in finding people who don’t want to be found. It was longlisted for the Theakston’s Old Peculier Crime Book of the Year 2015. The follow-up, THE SAMARITAN is one of the spring titles for the Richard & Judy Book Club.

Mason Cross – Top 5 Tips on Being a Writer

The best preparation for being a writer is to read a lot and write a lot. Everyone says this, but that’s because it’s true. Like all writers, I started out as a reader. I always enjoyed creative writing at school, but reading widely helps you to work out what sort of stories you want to tell.  The other biggie is to take it seriously. If you want to write for a living, you have to treat it like a real job and show up for work, even on the days you don’t particularly feel like it.

2. You need a system, but everyone has a different one

I used to work in fits and burst, writing loads one day and then not doing anything for weeks at a time while I pondered all of the wonderful books I wasn’t writing. I had been told that a serious writer needs to write 1,000 or 2,000 words a day, and that seemed like an impossible task to fit in amongst all of the other responsibilities and distractions of everyday life.

My breakthrough came when one of my friends suggested just writing 500 words a day. That let me focus on a manageable goal, but at the same time, the words started to build up fast: 500 words a day, six days a week is 3,000 words. In four weeks you have 12,000 words. In six months, you have a first draft of a novel.

Everyone’s different when it comes to laying the groundwork. You don’t necessarily need to painstakingly craft your 3 act structure or write detailed biographies of every major and minor character. Stephen King doesn’t plot at all. James Ellroy constructs elaborate 300-page plot outlines. They both write great books. Me? I try to plot in advance as far as possible, knowing that I’ll improvise a lot on the journey.

3. You need to put yourself out there

If you want to maximise your chances of somebody publishing your work, you need to let people know about it. Submit stories to magazines and competitions. Blog and tweet. Go to literary festivals and chat to authors and publishers in the bar. Do everything you can, because you never know what’s going to help.

The breakthrough for me was one of the things that took the least effort: I posted a few of my short stories on the HarperCollins Authonomy website (now sadly departed), and against the odds, it resulted in a contact from the agent who now represents me.

Even now I’m published, I think it’s important to make sure I’m as visible as possible, which means doing festivals, library events, guest blogs, interviews and basically never saying no to anything that gives me an opportunity to reach new readers.

4. You can learn from every writer

I’ve been inspired and motivated by so many writers. Not just crime writers, either: SF, historical, graphic novels, literary, horror, non-fiction. Listen to established writers and work out how their suggestions chime with your own methods and experience.

“Try to leave out the part that readers tend to skip.” (Elmore Leonard)

“Whatever it takes to finish things, finish. You will learn more from a glorious failure than you ever will from something you never finished.” (Neil Gaiman)

“Amateurs sit and wait for inspiration, the rest of us just get up and go to work.” (Stephen King)

…but you learn just as much by reading authors in the genre you aspire to work in and beyond. If you read enough, you’ll start to notice things you can learn from, like a clever plot twist, or the way dialogue can do the heavy-lifting on character development, or a really amazing opening line.

And you can also learn from not-so-good books, from the flat-out terrible, to the ones that almost work but don’t quite. You start to see the pitfalls to avoid. And even if you think a book just plain sucks, you can still learn from it by working out what made it suck, and then not doing that. 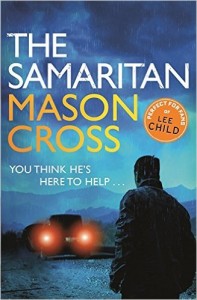 One of the best pieces of advice I got came from comic book writer Mark Millar. At one of his events he spoke about knowing a lot of people who said they were writing a novel or a screenplay, but what they were actually doing was sitting around in coffee shops with a laptop talking about writing a novel or a screenplay. It reminded me of the sign Harry Bosch keeps on his desk: Get off your ass and knock on doors. The writer’s memo should be the opposite: Sit your ass down and write some words, something like that.

If you want to get in touch with Mason, or keep up to date with what’s happening with him, here are the best links to him and his stuff …