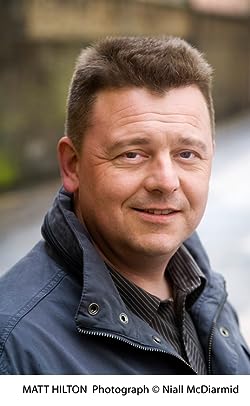 Back in 2008 I became the envy of many an aspiring author when I managed to secure a 5 book, seven figure deal, with Hodder and Stoughton for my Joe Hunter thriller series. At the time, as a debut thriller author, it was an unheard of deal, and please correct me if I’m wrong, but I think it still stands as a record. I don’t mention all this to brag, just to inspire. The old adage “if I can do it then so can anyone” stands true in this case. The reason being I wasn’t in any privileged position, didn’t know anyone in publishing, wasn’t a celebrity, and didn’t know any secret handshakes or any such ploys to get my book noticed. All I had behind me was many years of trying (and failing) and a desire never to give up.

My writing career took off at crazy speed once the deal was struck – since then there have been 10 books in the Hunter series published world wide (the latest is “The Devil’s Anvil”, published 4th June 2015, but as I write that’s only a few days away now). I’ve another new thriller series beginning with “Blood Tracks” – to be published November 2015 by Severn House Publishers – being the first to feature Tess Grey and Nicolas “Po” Villere.  I’ve also published various other novels, primarily in the horror genres, as well as had a number of short stories published in various anthologies and collections. The last seven years has been a wild ride, where I’ve been places and met people I’d never have dreamed of beforehand, including many of my literary heroes, but it has also been hard work. Not that I’m complaining about the workload: I actually thrive on it; otherwise I’d give in to my natural state of procrastination.

I’m one of those writers who can’t recall a time I didn’t have a pen or pencil in hand, and was writing little stories even as a small child. I think the first time I began writing in earnest was after I read Bambi and Watership Down, and decided to write a book about baby deer threatened by hunters and tree fellers who were destroying their home. I was animal daft back then, and started reading the Willard Price animal adventure books.

I used to go to a library van that came to our local community centre, and would grab the next Price book, and read it voraciously cover to cover in record time. During one visit to the library van though I was struck with the bad news that Price had died and there’d be no more of his thrilling adventures. In my childlike wisdom, I came up with the best idea I could think of. I went home, and started writing the next book in the series.

Looking back now it was probably a horrendous effort, but it gave me that lifelong ambition to write and keep on writing. I was about eleven at the time. Soon after, when I was about thirteen, I got into the books of S E Hinton, and from there had a go at my own coming of age tale, called AGGRO. Around about then my reading tastes were changing, and I found the old pulp masters like Robert E Howard, HP Lovecraft and Karl Edward Wagner, and tried my hand at writing heroic fantasy and weird horror (something I still love to this day). I also discovered men’s action books, exemplified by the likes of Don Pendleton’s Mack Bolan, Warren Murphy and Richard Sapir’s Remo Williams, and the homegrown George g Gillman’s Edge. For a number of years I attempted to write my own homages to the authors and characters I loved to read.

At about 20 years old I completed my first ‘adult’ novel, and from there on in began the process of sending it out to agents and publishers in the hope of snagging that publishing deal I dreamed of. Another six novels, countless short stories and articles later, not to mention another 22 years passing me by, and I still hadn’t achieved my dream. Not that I didn’t almost smell success on a few occasions along the way. I was shortlisted in a couple of national novel writing competitions, and got not one but two publishers interested in two separate books – both publishers ultimately passed on them in the end, but I still had that sense that I must be doing okay, just not quite good enough.

It took me all those years to come to the understanding that it wasn’t that my books were no good, they simply weren’t commercial, and I was attempting to enter a commercial market. I was writing standalone books, whereas at the time publishers were looking for series characters, and authors who could deliver more than one book. How it took me as long to realise now beggars belief, because when I thought about my own reading habits, it should have been apparent that I kept going back to the same authors time and again to read what their familiar characters were up to next. When that light bulb finally went off, I went back to the old drawing board, and started to write with a continuing series in mind.

I should backtrack here and tell you a little about my circumstances. I got married at 20, and worked full time to raise my kids. I worked for a long time in the private security industry and then became a police officer. Now throughout that time, I was writing in what little spare time I had, at a typewriter, and only latterly on a computer. There was no such thing as the internet for me back then, and not even a peer group I could communicate with. I didn’t know another writer, let alone have someone I could go to for advice or guidance. I was out on a limb in rural Cumbria, about as far away from the publishing centre of London you could imagine.

So much of what I tried to do was by trial and error, mostly error.  But I never lost that desire to see my by-line on the cover of a book. I kept plugging away, sending out, accepting the inevitable rejection, and then plugging on again. In 2006 the unimaginable happened, and I lost my 17-year-old daughter under tragic circumstances, and have to admit that her death almost finished me. Not to be too maudlin though, one of the best things that ever happened to me came out of probably the worst. I began to reevaluate what was important to me, and it made me more determined to achieve my dream of publication.

You’ll probably roll your eyes, but I often wonder if there was some unseen hand guiding me, because certain thing began to fall into place for me. Before she died my daughter was the only person to have read a book I’d written called “Jubal’s Hollow”. About the same time as I had the epiphany that I should be aiming my writing towards the commercial market, I recalled my daughter’s enthusiasm for the book and how she’d encouraged me to write a follow up.

Spurred by that memory I went back to the book, and thought about how I could adapt it, and the characters, to make them both viable and commercial. I rewrote the book, changed the characters’ names, the location from the UK to America, and the title to “Dead Men’s Dust” and immediately went off on the look out for an agent to represent me.

Simon Kernick’s “Relentless”, and his follow up “Severed” had been subsequent summer blockbuster hits, and I thought why not try his agent. I looked up Luigi Bonomi – of Luigi Bonomi Associates – and saw that he’d just been crowned Agent of the Year by some prestigious body or other, and thought; right it’s over to you, Luigi. Really I had no expectation of a reply, so when in November 2007 Luigi contacted me asking to see the entire novel, and requesting a meeting in London, I was pretty much blown away.

I had to beg for some time off, and borrow my train fare and hotel fee, but I made it there. It came to pass that Luigi liked the novel, but it needed a lot of work. He gave me guidance, suggestions, and set me to work. He has since admitted that he was testing my resolve, my ability and my enthusiasm and work ethic before agreeing to represent me. I did the work, and got the book back to him in February 2008, at which point he immediately signed me up and put the book out to auction. The deal I mentioned at the beginning of my ramblings came like an explosion to me, and pretty much overnight I went from being a beat cop, to a professional author.

Thankfully, I’ve been doing a job I love now for the past seven years, and hope to continue for many more to come.

My career was a long time coming. But now that I look back on all of those years, I see them as my apprenticeship, the time it took me to learn and practice the skills I need to do my job right. If I had my time over again, would I do anything different? I’m not sure. Probably not. I think it was just my time and I managed to grab the opportunity with both hands. There are infinitely better writers out there, people who have a better grasp of language and how to put it down on paper, but I’m happy that most people who pick up a Matt Hilton book get some enjoyment from it. I can’t ask, and don’t expect, any more than that.

For aspiring authors my best advice is simple: read a lot, write a lot. Be professional. Be humble, and take advice from those who know better. Take rejection as an opportunity to put things right next time. Don’t be envious of other writers’ success; celebrate it because it opens opportunities for others writing in the same genre (it could be you). Be prepared to work hard, and also prepared for criticism. Lastly, and most importantly, never give up on your dream.

Matt Hilton quit his career as a police officer to pursue his love of writing tight, cinematic American-style thrillers. He is the author of the high-octane Joe Hunter thriller series, including his most recent novel ‘The Devil’s Anvil’ – Joe Hunter 10 – published 4th June 2015. His first book, ‘Dead Men’s Dust’, was shortlisted for the International Thriller Writers’ Debut Book of 2009 Award, and was a Sunday Times bestseller, also being named as a ‘Thriller of the Year 2009’ by The Daily Telegraph. Dead Men’s Dust was also a top ten Kindle bestseller in 2013. The Joe Hunter series is widely published by Hodder and Stoughton in UK territories, and by William Morrow and Company and Down and Out Books in the USA, and have been translated into German, Italian, Romanian and Bulgarian. As well as the Joe Hunter series, Matt has been published in a number of anthologies and collections, and has published novels in the supernatural/horror genre, namely ‘Preternatural’, ‘Dominion’, ‘Darkest Hour’ and ‘The Shadows Call’.  He has a new thriller series featuring investigators Tess Grey and Nicolas ‘Po” Villere beginning in November 2015 with Blood Tracks, from Severn House Publishers. He is currently working on the next Joe Hunter novel, as well as a stand-alone thriller novel.

2 thoughts on “Special Guest: Matt Hilton on his Path to Publication”